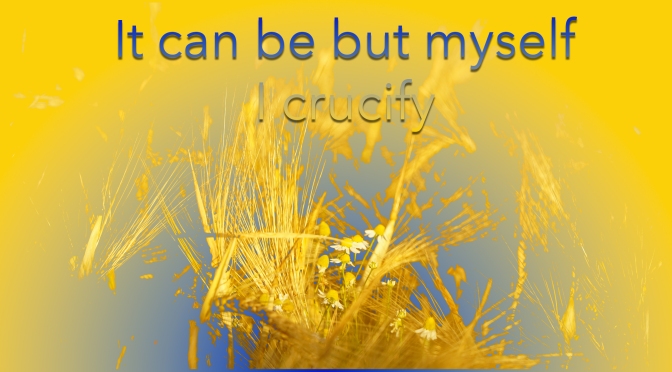 Perhaps at first you will not understand how mercy, limitless and with all things held in its sure protection, can be found in the idea we practice for today. It may, in fact, appear to be a sign that punishment can never be escaped because the ego, under what it sees as threat, is quick to cite the truth to save its lies. Yet must it fail to understand the truth it uses thus. But you can learn to see these foolish applications, and deny the meaning they appear to have.

Thus do you also teach your mind that you are not an ego. For the ways in which the ego would distort the truth will not deceive you longer. You will not believe you are a body to be crucified. And you will see within todayʹs idea the light of resurrection, looking past all thoughts of crucifixion and of death to thoughts of liberation and of life.

Todayʹs idea is one step we take in leading us from bondage to the state of perfect freedom. Let us take this step today that we may quickly go the way salvation shows us, taking every step in its appointed sequence as the mind relinquishes its burdens one by one. It is not time we need for this. It is but willingness. And what would seem to need a thousand years can easily be done in just one instant by the grace of God.

The dreary, hopeless thought that you can make attacks on others and escape yourself has nailed you to the cross. Perhaps it seemed to be salvation. Yet it merely stood for the belief the fear of God is real. And what is that but hell? Who could believe his Father is his deadly enemy, separate from him, and waiting to destroy his life and blot him from the universe, without the fear of hell upon his heart?

Such is the form of madness you believe, if you accept the fearful thought you can attack another and be free yourself. Until this form is changed, there is no hope. Until you see that this, at least, must be entirely impossible, how could there be escape? The fear of God is real to anyone who thinks this thought is true. And he will not perceive its foolishness, nor even see that it is there so that it would be possible to question it.

To question it at all, its form must first be changed at least as much as will permit fear of retaliation to abate, and the responsibility returned to some extent to you. From there you can at least consider if you want to go along this painful path. Until this shift has been accomplished, you can not perceive that it is but your thoughts which bring you fear, and your deliverance depends on you.

Our next steps will be easy, if you take this one today. From there we go ahead quite rapidly. For once you understand it is impossible that you be hurt except by your own thoughts, the fear of God must disappear. You do not now believe that fear is caused without. And God, Whom you had thought to banish, can be welcomed back within the holy mind He never left. Salvationʹs song can certainly be heard in the idea we practice for today. If it can but be you you crucify, you did not hurt the world and need not fear its vengeance and pursuit. Nor need you hide in terror from the deadly fear of God projection hides behind. The thing you dread the most is your salvation. You are strong, and it is strength you want. And you are free, and glad of freedom. You have sought to be both weak and bound, because you feared your strength and freedom. Yet salvation lies in them.

There is an instant in which terror seems to grip your mind so wholly that escape appears quite hopeless. When you realize, once and for all, that it is you you fear, the mind perceives itself as split. And this had been concealed while you believed attack could be directed outward, and returned from outside to within. It seemed to be an enemy outside you had to fear. And thus a god outside yourself became your mortal enemy; the source of fear.

Now, for an instant, is a murderer perceived within you, eager for your death, intent on plotting punishment for you until the time when it can kill at last. Yet in this instant is the time as well in which salvation comes. For fear of God has disappeared. And you can call on Him to save you from illusions in His Love, calling Him Father and yourself His Son. Pray that the instant may be soon, ‐ today. Step back from fear and make advance to love.

There is no Thought of God that does not go with you to help you reach that instant, and to go beyond it quickly, surely and forever. When the fear of God is gone, there are no obstacles which still remain between you and the holy peace of God. How kind and merciful is the idea we practice! Give it welcome as you should, for it is your release. It is indeed but you your mind can try to crucify. Yet your redemption, too, will come from you.

Join us in the new Spiritual healing class

Join us in this new seminar

Join us today in the new E-learning. Take a peak!

Prayer, the medium of Miracles

Prayer is the natural communication of the Created with the Creator.

Some visuals and the recording of today’s Miracle Work: “Unforgivable”

Listen to Audiobook Urtext A Course in Miracles